Chris' Corner: Does your South Simcoe Home have a weak guardrail?

Does your South Simcoe Home have a weak guardrail?

Reuben Saltzman.  shares more great information here with a common deck issue, namely Weak Guardrails.  Have a weak guardrail?: ... or know of someone who does?

The CPSC estimates that between 2003 and 2007, there have been over eleven thousand injuries caused by structural failure or collapse of guardrails at outdoor decks.  It's not tough to understand why - when people have parties in the summer, everyone hangs out on the deck.  Throw in a keg of Busch Light, a few (ahem) 'people' that make the rockin' world go 'round, and a weak guardrail... boom.  Guardrail collapse.  Weak guardrails are one of the most common safety issues with decks.

The current requirement for new deck guardrails is that they withstand 200 lbs of pressure at any point along the top rail (Table R301.5).  Actually, this standard applies to all guardrails, both inside and outside the house, but decks are the place where it matters most.

My standard method for testing guardrails has always been to just push on them a little.  If they feel weak, I recommend having them reinforced or rebuilt.  Once a guardrail moves an inch or two without much pressure, I stop pushing; I don't want to be the one to break it.  Home inspections are supposed to be visual, I know, I know... but I like to touch stuff.

I've never used any type of testing equipment, but I recently picked up a fancy-schmancy piece of highly specialized deck guardrail testing equipment to help get a better idea of what 200 lbs of pressure felt like.  Jealous much? 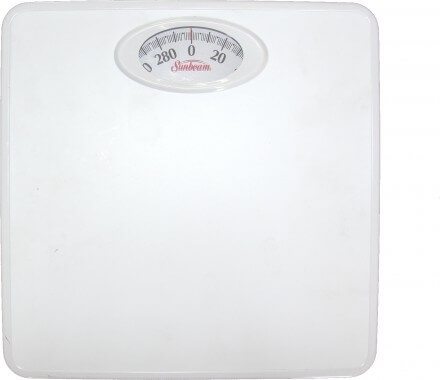 Ok, it's just an $8 bathroom scale.  After some playing around, I've learned that 200 lbs is about the most pressure that I can personally apply to the top rail of a guardrail, just by standing on the ground.  In the photo below I'm applying about 150 lbs of pressure, and I'm straining to do it. 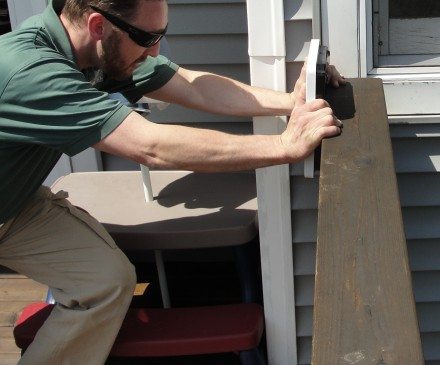 The surest way to construct a guardrail that will withstand 200 lbs pounds of pressure is to use metal brackets that are designed just for this purpose.   A couple manufacturers that make such brackets are DeckLok and Simpson Strong-Tie.   If special metal brackets aren't going to be used, the support posts should be constructed with full size 4x4s (not notched at the bottom), attached with through-bolts, and extra blocking usually needs to be installed to help keep the guardrail secure.

In the photo below, the ovals show where extra blocking was added.  This blocking tremendously stiffens the joist that the guardrail is attached to, making it so the guardrail won't budge even when a full 200 lbs of pressure is applied. 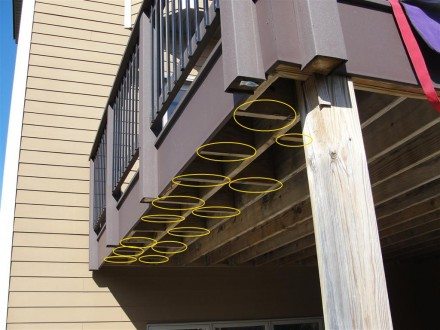 The bottom line is that weak guardrails are a safety hazard that should be corrected, especially on decks that are high above the ground.  For specific guardrail construction methods and rules, turn to page 15 of the  Prescriptive Residential Wood Deck Construction Guide.

How to prevent your deck from collapsing: start by attaching it properly