Tankless Water Heaters: Are they a good choice for you?

Cynthia Freeney of Basement Systems Inc located in Seymour CT, shares some great information about this "new to North America" Water Heating System... If your Water Heater is coming to the end of its life, consider a tankless water solution, it might save you some money and help Save Our Planet. 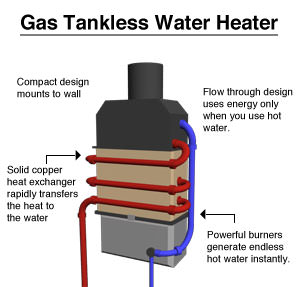 Tankless or Demand Water Heaters are the "new" thing  in terms of water heating systems, for a number of reasons.

When compared to conventional storage tank water heaters, they are much more energy efficient, more compact, and provide an endless supply of hot water, shower after shower, load after load of dishes, because they heat water as it is used.

They aren't however, a "new" thing. Tankless water heaters have been used successfully overseas for many years. The technology was being overlooked in the U.S. in times where energy prices were lower and more stable than they are now, the demand wasn't as high, and the resources weren't so scarce.

Now that we are faced with dwindling fossil fuel supplies and able to measure the impact that our energy consumption has in the environment, the tankless water heater re-emerges as a viable way to get much needed hot water and waste less energy.

If you need to replace your old water heater, and want to know if a tankless water heater is the right choice for you, here are some facts that you should consider.

In terms of energy consumption, a tankless water heater performs much better than a storage tank unit. With a tankless model you can cut your water heating bill by as much as 45%.

In a storage tank, there is what we call a "standby heat loss". The water in the tank cools down and needs to be reheated several times a day, in order for you to have hot water whenever you need. That happens several times a day, 24/7, 365 days a year, regardless of whether you are awake or asleep, at home or away.

A tankless will only heat water when it is needed.

While tankless water heaters are becoming more affordable, the price for a tankless unit is still a bit higher than the price of a storage tank unit. Installation can also add up if you are replacing an old tank by a tankless, or an electric for natural gas model, as the work may involve making some adaptations.

The good news is that until the end of December 2011,  natural gas powered, ENERGY STAR qualified tankless units qualify for a federal tax credit.

Tankless units may also qualify for many other incentives available at a local level in many states.

As we said before, if you are replacing an old tank unit by a tankless, there might be the need to adapt some of the existing pipes. On the bright side, tankless units are compact and much smaller than bulky storage tanks, and can fit is small spaces. They are also less susceptible to corrosion than tank units and not as likely to leak and flood the area.

Best results, not only in term of savings but overall performance, are obtained when the model is made to fit the household size, schedules, needs and profile.

Some of the common complaints associated with the use of tankless are usually related to the type and capacity of the system being used.

One of the common complaints is that tankless units can't handle multiple simultaneous uses, such as showering and running the dishwasher at the same time.

Truth is that some models have the ability to modulate capacity to match usage, and operate at the most efficient setting according to how much water is needed. Some models lack that ability.

For homes with many bathrooms, larger families and busy schedules, sometimes it makes sense to install two or more smaller units, to handle different needs.

In addition, let's face it, can you really wash your dishes and shower at the same time with a tank-type model, without quickly running out of hot water?

Another common complaint regarding tankless water heaters is the so called "cold water sandwich". Cold water standing along the pipes than may cause a sudden burst to come out a few seconds after you turn on the hot water. That can be unpleasant if you are in the the shower, but it can be solved if you wait a few seconds before getting in. It usually takes less time than it would normally take for hot water to come out of a tank-type unit.

If you live in Greater Wilmington, Delmarva, and nearby areas, and you are considering a tankless water heater, let Dr. Energy Saver Delaware help you chose and install a system than fits your family's needs, schedules and demand. Call them for a free no obligation Tankless water heater estimate, and save money by making sure you get the right model with the right capacity to handle the job!

Not ready for the switch yet? Dr. Energy Saver Delaware can evaluate your current water heating system, and with small and affordable improvements, make it work at top performance and save you money in water heating bills!